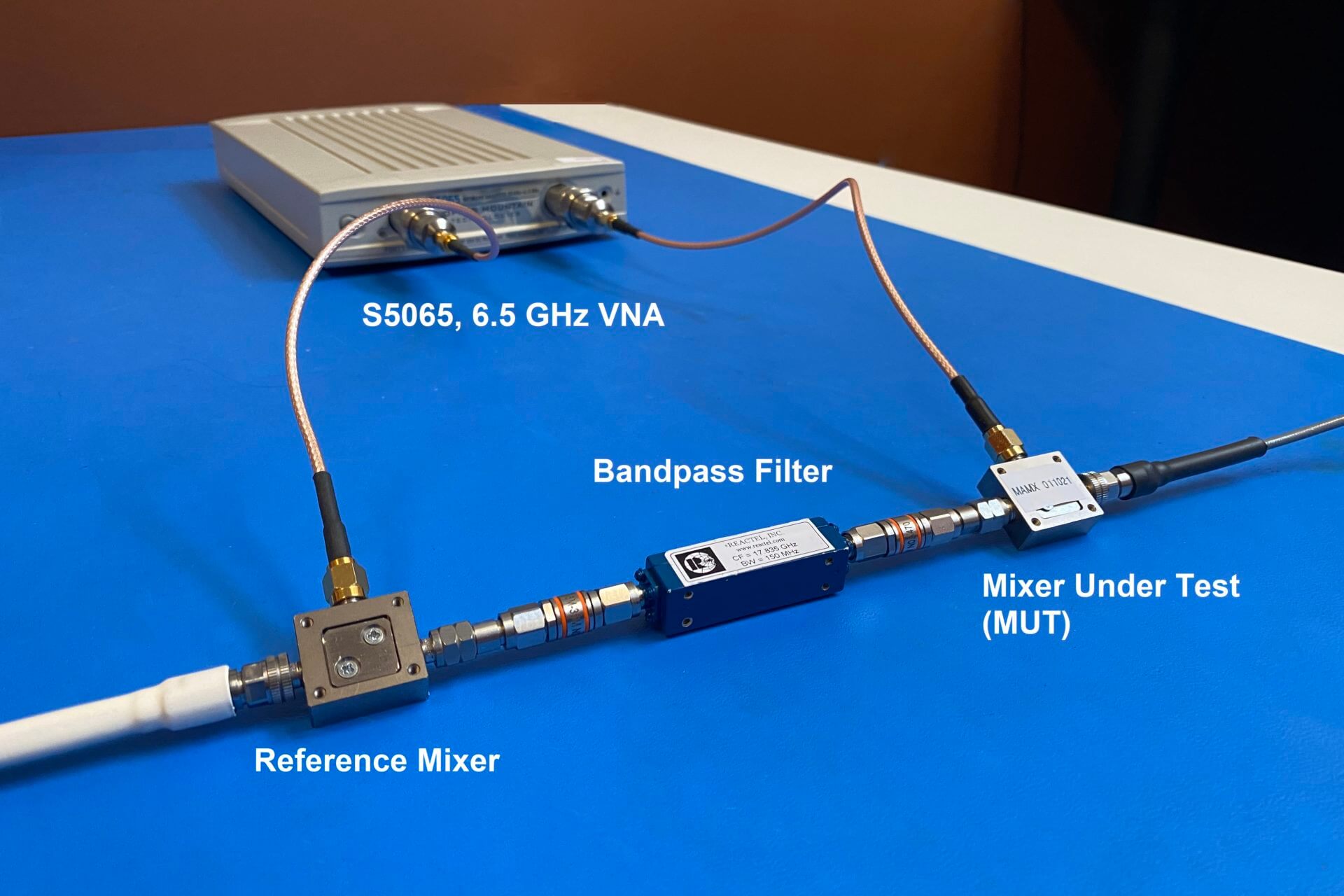 It is important to use the right equipment for the right measurement to get results that are accurate. Precision millimeter-wave (mmWave) measurements normally require a VNA with built-in capability or mmWave extenders to augment the frequency range. This equipment may be used to evaluate mmWave mixers which are commonly used to up-convert or down-convert 5G signals back and forth from baseband frequencies. CMT mmWave frequency extension systems presently support the measurement of frequencies up to 330 GHz in specified bands which are primarily determined by the type of waveguide required. These extenders and bands are:

To make measurements without an extender, the model S5243 Compact VNA supports measurements from 10 MHz to 44 GHz with 2.4mm NMD connectors on the front panel. This is something worth considering when choosing a mmWave measurement system. How will the Device Under Test (DUT) be connectorized? Will the DUT have 1mm coaxial or waveguide connections? 1mm connectors are very expensive and wear quickly.  If waveguide is used, the frequency band is physically limited and measurement below the waveguide cut-off frequency is not possible. It is therefore important to consider what kinds of RF measurements are needed. It is much more affordable to implement a waveguide “banded” approach with frequency extenders operating in the desired band than to purchase a “broadband” VNA which covers that range plus the lower frequencies.

Any of these equipment solutions might be used to measure the performance of a mmWave mixer.

Using a Low Frequency VNA to measure a mm-Wave Mixer

It’s also possible to analyze the performance of a mmWave mixer using a low frequency VNA. Because the baseband IF frequency is often in range for a microwave frequency VNA, a “Reference” mixer can operate with the same Local Oscillator (LO) to generate the mmWave signal needed to analyze a Mixer Under Test (MUT). See the diagram below. In this diagram, the VNA is connected to the Reference Mixer and the MUT. The “RF” in this example is the low frequency to and from the VNA and the “IF” is the mmWave signal. This nomenclature could certainly be interchanged. The Reference Mixer is needed to up-convert and down-convert between the mmWave and the VNA baseband frequencies. To do this accurately, a first level of calibration is performed before the two mixers and a second-tier calibration is performed after the image filter to de-embed the effect of the Reference Mixer. With both calibrations in place, it is possible to measure the performance of the Mixer Under Test alone and determine its return loss on both ports and conversion loss from RF to IF ports. But how is this second-tier calibration performed?

For the second-tier calibration, the reference mixer and image filter are attached to the Port 1 cable and the local oscillator is applied to it. The Vector Mixer Calibration is then begun in the appropriate section of the calibration menu on the VNA. A mmWave calibration kit which will be used on the mmWave side of the mixer is first selected, then the port connection, which will be Port 1 in this case. The LO frequency is entered along with the selection of IF mixing strategy, “RF+LO”, “RF-LO”, or “LO-RF”. This information is necessary to allow the VNA to calculate the mmWave IF frequencies from the VNA output frequencies that the calibration kit sees. This is important for calibration since the Open and Short will have a different reflection phase at each mm-Wave frequency.

The mmWave Open, Short, and Load will then be applied to the high-frequency side of the mixer in turn and if the “Setup Option” box is checked in the software, a full 2-port Touchstone characterization of the Reference Mixer will be loaded into Port 1 de-embedding and the de-embedding function enabled automatically. The Reference mixer has now been effectively removed from the measurement and one can proceed to measure the MUT.

But wait! Where did the 2-port characterization of the Reference Mixer come from? We only performed a 1-port calibration on the mmWave side. We never did anything like a “Thru” measurement. To determine the full 2-port response of the mixer, we take advantage of a mathematical trick. Figure 3 shows the input reflection coefficient,

of any S-Parameter network terminated with a known load, It can be shown that the input reflection for the network above is given by:

If we assume transmission reciprocity through the reference mixer such that S12 = S21, then we can eliminate S12 in the above equation and write Equation 2.

This is a reasonable assumption for an essentially passive circuit. If we apply three known loads to the network and can measure the input reflection coefficient for each, then we will have three equations and three unknowns and can solve for S11, S21, and  S22 at each VNA frequency.

It is important to eliminate the IF image signal as it would recombine in the MUT to generate the same RF frequency as the desired IF signal. Since the image does not arrive at the MUT with the same phase, the generated RF would suffer constructive and destructive interference with the desired IF signal causing undesirable ripples. Figure 4 shows the test setup with the frequencies noted. A full 2-port calibration was first performed on the ends of the test cables with the VNA frequency at 2.165 GHz center and 150 MHz span using an Automatic Calibration Module, or ACM. Next, the Z5411 50 GHz mechanical calibration kit was selected and the LO frequency and IF scheme were set up in the Vector Mixer Calibration as shown:

After the Open, Short, and Load on the Z5411 calibration kit were measured, the VNA automatically created the Touchstone de-embedding file and applied it to Port 1, effectively removing the conversion loss effects of the Reference mixer and the insertion loss of the image filter. The MUT was then attached, and a measurement performed. The results are shown in Figure 7. The measured conversion loss compares reasonably well with the 8 dB typical performance on the manufacturer’s datasheet. What about the accuracy?

What sort of accuracy should we expect from this measurement? Examining the de-embedding file is instructive. The calculated S21 of the Reference Mixer is shown in Figure 8: Apparently, the loss through the Reference Mixer and Image Filter together is about 10 dB, so the three reflection measurements that were made suffered 20 dB, two-way loss. If we examine Equation 2, the

term in the numerator is this 20 dB loss.

When we measured the Reference mixer with the calibration kit Load on its IF port, we explicitly measured S11 since the second term in Equation 2 is equal to zero. That measurement of S11 (approx. -7 dB) is shown below in Figure 9: When the Open and Short are applied to the IF of the mixer, the fraction after S11 in Equation 2 is not zero and causes a small vector perturbation on S11. The VNA measurement uncertainty on reflection measurements at -7 dB is +/- 0.4 dB (between 0 and -15 dB) so the vector contribution of the second term of Equation 2 will need to be significantly bigger than 0.4 dB for it to be resolved with reasonable accuracy.

+/- 0.4 dB on -7 dB is approximately +/- 0.02 in linear terms and if we assume that S22 is small in the denominator of Equation 2 we can approximate the contribution of that second term as simply

. If  = 0.02 then = 0.141 or -16.9 dB. If the conversion loss of the Reference Mixer is 16.9 dB, the second term of Equation 2 will be approximately 0.4 dB of the  value, which is right at the limit of our measurement resolution. This is therefore the hard upper limit for conversion loss of the reference mixer where we can expect to achieve a reasonable calibration. At 16.9 dB, the error is infinite, and the de-embedding terms cannot be determined with any accuracy at all. It is naturally assumed that any error in the estimation of Reference Mixer de-embedding term S21 (Conversion Loss) will directly impact the measurement error of the DUT.

In this example, -7 dB was used for the value of S11, but over the range of -5 dB to -20 dB the hard limit on accuracy is between -16 and -19 dB and the error curve in Figure 9 is not much changed. Clearly, it is a good idea to use a Reference mixer with 10 dB conversion loss or less or the accuracy of the de-embedding will suffer and the final measurement of the MUT will be unsatisfactory.

This example used an S5065 6.5 GHz 2-Port Compact VNA, but there are many more models of this type ranging in frequency from 1.3 GHz to 44 GHz. See www.coppermountaintech.com for more product details.