Balanced measurements are necessary for a number of applications. High-speed digital transmission lines are often employed on printed circuit boards (PCBs) to transport signals with extremely high bandwidths. It is important to be able to verify insertion loss, characteristic impedance, phase imbalance, and crosstalk to adjacent conductors. Antennas are sometimes fed with balanced lines as well and being able to verify the return loss or VSWR of the balanced feed plus antenna combination is useful.

Using a VNA for Balanced Characterization

A vector network analyzer makes only unbalanced measurements. That is, each port sends and receives signals on a coaxial cable where the RF excitation signal and any reflections progress on the center conductor and the equal and opposite return signal is carried on the inside of the coaxial shield. No RF current should flow on the outside of the shield.

As a side note, we rarely think about the return path on the inside of the shield. Consider that there is no net magnetic field generated by the cable since the two signals have opposing fields and cancel. Therefore, it is possible to clamp a ferrite core on the outside of the cable to prevent externally induced RF from traveling on the outside of the shield. If the two currents didn’t cancel, the ferrite would make the center conductor unacceptably inductive, but because they do, there is no net effect on internal signal propagation.

Because the VNA does not generate a balanced drive signal, it is necessary to use two ports to measure a balanced input or output. For instance, as shown in Figure 2, one side, “A”, of the input is driven by Port 1 while Port 2 maintains a 50-ohm termination on side “B”. “B” is then driven by Port 2 and “A” is terminated by Port 1. The two unbalanced measurements may be combined to calculate the effective balanced response. It is important to note that this method only works with a passive, linear DUT. An active differential device may not exhibit linear behavior if only one input is driven at a time. In that case, the linear combination of one driven input while the other port terminated will not likely be the same as the case where both inputs are driven simultaneously with a balanced drive.

As an example, here is the calculation for the input Differential S-parameter of the DUT in Figure 2:

Equation 1
(The 11 subscript on SDD refers to the A/B differential port 1, not port 1 of the VNA)

This equation makes a certain amount of sense. The differential input looks like the sum of the two port reflections A and B minus the two cross terms between them.

The 2-port VNA software, S2VNA from Copper Mountain Technologies does not have this measurement conversion built in, but data can easily be taken using SCPI commands and processed to produce differential S-parameters. With port numbering as above the differential Return Loss is found by Equation 1 and Insertion Loss is:

With appropriate unbalanced measurements, it is, therefore, possible to determine balanced performance.

The voltage balun generates balanced voltage outputs, acting as a transformer. It will not operate well at low frequencies where coupling is reduced and resonance with interwinding capacitance limits the high-frequency response. The current balun can generally operate over a wider bandwidth and produces a balanced output current by virtue of the magnetic coupling presenting a high impedance to unbalanced currents. At low frequencies, the signal may pass through the chokes, but common mode rejection will be poor. Resonance at high frequencies is also an issue.

There are a great number of balun types and configurations, but the focus here will be the characterization of a balun for use with a 2-port VNA.

A Balun, which is a contraction of the words Balanced and Unbalanced may be attached to a VNA port in order to convert the unbalanced port for balanced measurement. With two baluns, a 2-port VNA could make fully balanced measurements of passive or active devices. For accurate measurements, the baluns must be fully characterized, and their effects removed, or de-embedded, from the measurement to ascertain the response of the DUT alone.

Before going further, it is important to understand the mixed mode S-parameter measurements which apply to a balun. A balun will have a Single-ended (SE) port on one side and Balanced (Bal) port on the other.

Port 2 will have two components. One component is the balanced signal where the phase difference is precisely 180 degrees between the two connections of the port. The other component is the common mode signal where the phase is zero degrees between the two connections. A perfect balun would create only a balanced signal on the Port 2 if excited by a signal on Port 1 and no common mode (in phase) signal would be generated. No balun is perfect though, and there will always be a combination of both. Note that any small phase shift introduced on either of the differential outputs will effectively create a small common mode component on that port, an effect particularly noticeable at higher frequencies. Proper PC layout with trace length matching is therefore important for printed circuit board layout of a surface-mount balun.

The mixed mode parameters for a balun are defined as follows: These mixed mode parameters define all differential and common mode effects of the balun.

Sss11 is the Return loss looking into the Single-ended Port 1.

Ssd12 is the Single-ended signal developed on Port 1 from the balanced signal on Port 2.

Ssc12 is the Single-ended signal developed on Port 1 by the Common mode signal on Port 2. This should be a very small number for a good balun.

Sds21 is the Differential Thru response of the balun.

Sdc22 is the Differential mode reflection from Port 2 due to a Common mode signal exciting it.

Scs21 is the Common mode signal generated on Port 2 by the Single-ended Port 1 input. This should be very small for a good balun.

Scd22 is the Common mode reflection from Port 2 due to a Differential excitation to it.

An additional figure of merit for a balun is its Common mode rejection ratios in each direction.

CMRR1 = Sds21/Scs21, the ratio of the Differential to Common mode signal generated on Port 2 by a signal on Port 1

Both Common mode rejection ratios should be reasonably large numbers for a good balun. A ratio of 10 or more (linear magnitude) is reasonable.

All mixed mode characteristics may be calculated from a 3-port measurement of the device.

For measurement, the Balun is connected to the VNA as shown below. The diagram depicts a voltage balun, but the configuration is unimportant. It is simply assumed that Port 1 goes to the unbalanced Logical Port 1, and Ports 2 and 3 are attached to balanced Logical Port 2.

In the following formulas, port numbers 1, 2, and 3 are used for the VNA S-parameter subscripts and the mixed mode S-parameters like SDD22 are designated by logical Ports 1 and 2. A full 3-port measurement of the balun is required, but this could be performed two ports at a time with a 2-port VNA while terminating unused ports with a 50-ohm load. These mixed mode S-parameters are calculated as follows:

Under normal circumstances, if an adapter is added to a VNA port, one could measure its 2-port response and then use de-embedding to remove its effect on measurements. De-embedding is a standard feature on Copper Mountain Technologies’ VNAs and is accessed under the “Analysis” menu. A balun is not a 2-port device though, so in this case, this method isn’t possible. An approximate method does exist though. SDS21 is like the S21 response, SSD12 is like S12, and SDD22 is something like S22. If a 2-port matrix is formed from these values and then used for de-embedding, the results are reasonable.

To be clear, a normal 2-port S-parameter matrix measurement of an adapter would be used but the differential equivalent may be substituted as an approximation.

A normal S-paramzeter matrix for de-embedding:

The reason why this method is only approximate is that the balun is not perfect and SCS21 of the first balun is not zero. A small common mode signal is created on the output of this balun along with the balanced signal. This signal is passed along and creates a small, unbalanced signal on the output balun due to SSC12 of balun 2. This signal adds to that created by SSD12. These imperfections of the balun result in small errors in the de-embedding. A more thorough treatment using all mixed mode parameters is certainly possible, but this would have to be done with post-processing in Python or some other programming language while Matrix 1 above can be utilized with the built-in de-embedding feature of the VNA.

It is possible that the Device Under Test between the two balun adapters might have a particularly large SCS21 and the small erroneous unbalanced signal created by the balun might be greatly amplified, causing an even larger error in the measurement.

A pair of baluns were evaluated, and de-embedding files were created. The baluns were ADC-WB-BB from Texas Instruments which are made from MiniCircuits TC-1-13MA+ baluns mounted on connectorized circuit boards. The frequency range is 4.5 MHz to 3 GHz. 3-port S-parameters were measured for the two balun boards over the 4.5 MHz to 3 GHz range and Touchstone de-embedding files as shown below were created for each using the entries from Matrix 1.

The two balun boards were then connected back-to-back with a pair of male-to-male SMA adapters and measured with and without de-embedding.

With no de-embedding, the results are shown below. The return loss is not good and there is over 4.5 dB of loss at 3 GHz. With de-embedding turned on and using the two files which were created, the results are more reasonable. The return loss is considerably better, and the insertion loss is flatter. There are places where the insertion loss is slightly positive, which is clearly an error but within a few tenths of a dB, the results are acceptable. Evaluating the de-embedded baluns in this manner is a good way to estimate the measurement errors being introduced.

The mixed mode S-parameters for a balun have been introduced and the method for calculating them explained. A method for creating 2-port de-embedding files suitable for use with a 2-port VNA and a pair of baluns has been shown and results demonstrated. Errors in the method were examined and for some applications, it is possible that the convenience of standard 2-port de-embedding techniques built into the VNA may outweigh the errors caused by balun imperfections.

Roy W. Lewallen, W7EL, Baluns: What They Do and How They Do It, ARRL Antenna Compendium, Vol 1, https://www.eznec.com/Amateur/Articles/Baluns.pdf 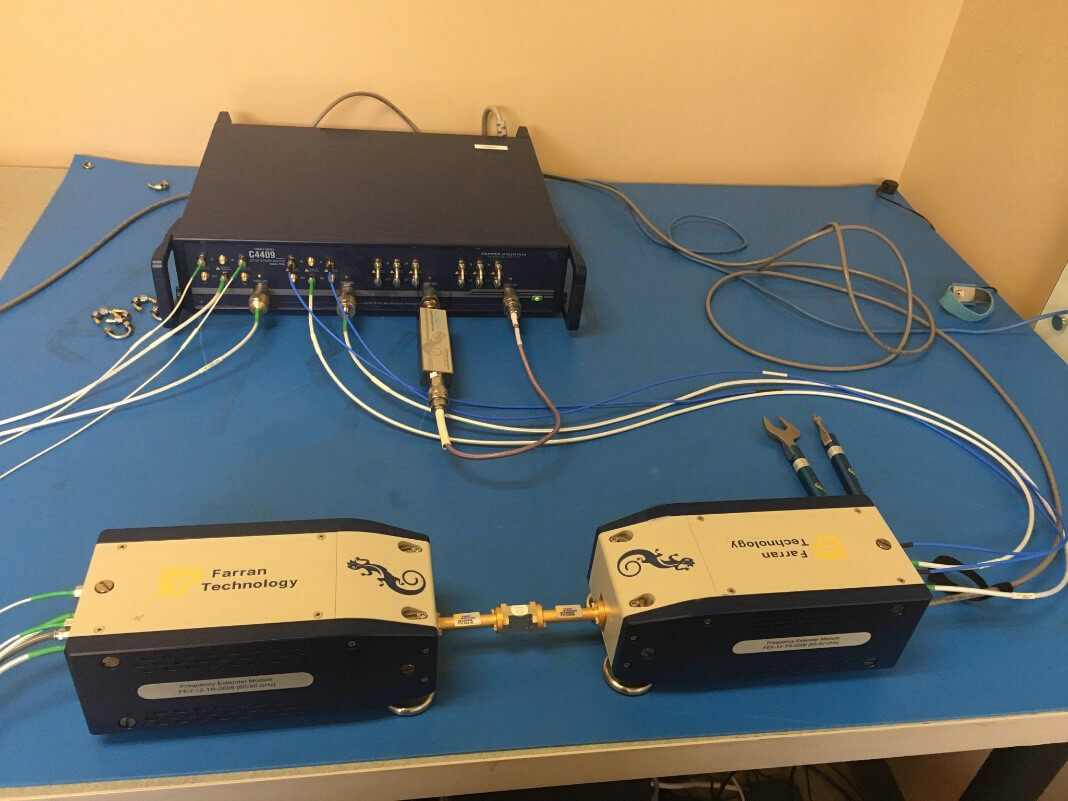 The dual band measurement setup is ideal If you have a 4-port frequency extension compatible VNA and are working in an application that deals with multiple frequency ranges. For example, some 5G applications deal in a low frequency band (below 6 GHz) as well as the mmWave frequency band. 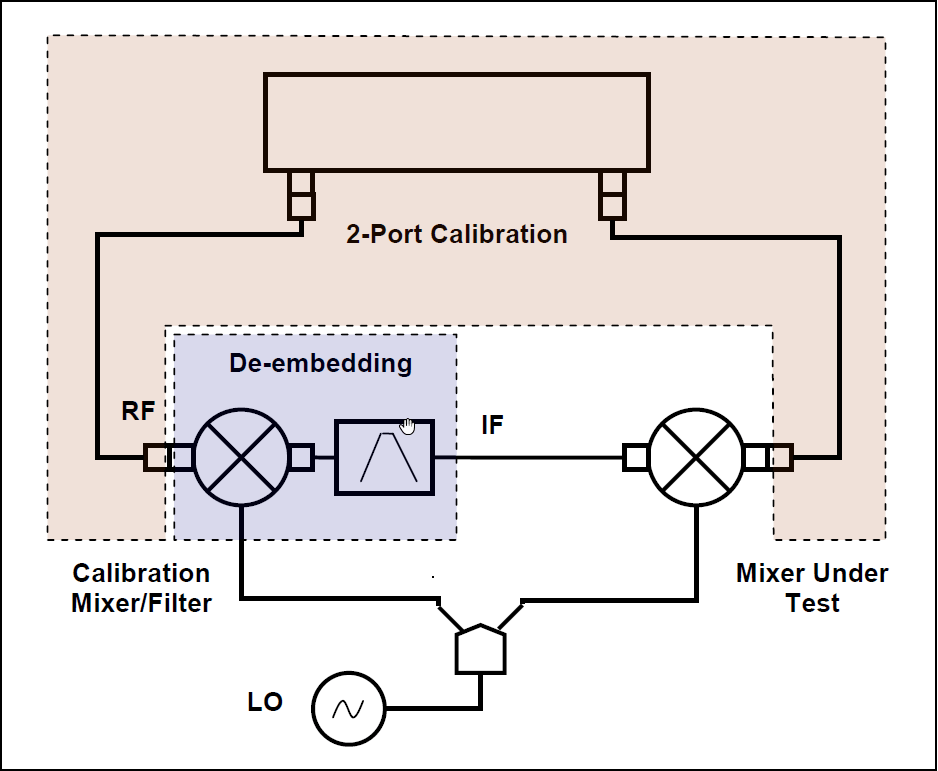